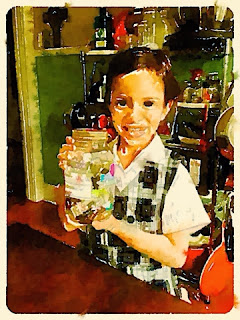 A year old promise is finally fulfilled. The first time I learned my daughter wanted her own puppy was at a Daisy Girl Scout Meeting.  The subject of this meeting was 'value of money'...learning how to save.  Each Daisy was given a mason jar with a slot on the lid, the jars were decorated with stickers and a label was attached for each girl to fill out with their name and what they were saving for.  Bebe wrote in "pupie".  My first thought was 'wow, she's never mentioned this I wonder if she couldn't think of anything else' then I asked her if she meant it.  She said 'yes, I want a poodle'.  Stop.  Hold up...we have a pooch, Coco (dachshund). BUT, Coco thinks she's the boss of Bebe...she will not lend herself to be petted and cuddled by Bebe.  Coco was caught by surprise when Bebe came home from the hospital, she was like 'hold me not that!'.  Before Bebe came into the picture I would wear Coco around my neck like a scarf, that pooch was spoiled...she still is just no longer naps around my neck.  Once I talked to Papa about a puppy we both agreed Bebe should have her own puppy because we saw how she wanted to love Coco.   Coco's mohawk would stand up and she'd snap at Bebe when she'd go to pet her.  She never hurt Bebe but she'd scare her...and me.  The date was set 'Valentine's Day'.  Bebe saved $32.73, Papa told her she could contribute $5 toward her new pet and Bebe said, "no all of it".

Meet Perla Camille she is so gentle.  Bebe and Perla are in love.  She was due for a fresh bath today so I decided to see what natural homemade dogie shampoos are online.  Found one that I had all the ingredients for.  It's nice.  She smells lemony fresh.

Combine all ingredients and gentle shake.  Label your bottle and gently shake before use.
Smells divine.
After Perla's bath Bebe blew her hair dry with a diffuser.  Perla loved it!

Posted by Honey Girl Kitchen at 12:57 PM No comments:

Honey Girl Kitchen
I have been helping in the kitchen since the age of 3...I am the 7th of 8 siblings. I bought my first cookbook at age 7 (I still have it). My mother cooked beautiful traditional Mexican food. Homemade flour & corn torillas, pot after pot of beans, chile in every way imaginable...& my favorite Mexican calabasita. My Mother cooked breakfast, lunch & dinner...we rarely ate out (maybe 2 times a year). Mom would pack a beautiful picnic when we traveled. I now love to picnic with my family when we travel, go to the zoo, the park, even in our backyard.

All That I Love